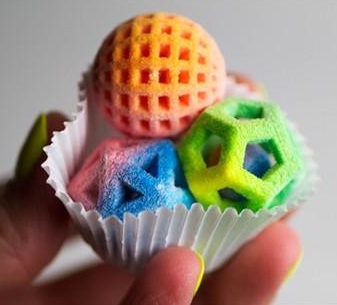 I have just had a journal article accepted for publication in Futures. The author’s accepted version can be found here, open access: ARTICLE – Download to Delicious postprint. (Edited to note that the journal’s version is here but behind a paywall).

In the article, I analyse the ways in which 3D food printing has been represented in online news articles and industry blogs. I identified five major promissory themes, portraying 3D printed food technologies as: futuristic; creative; healthy; efficient; and sustainable.

These themes contributed to sociotechnical imaginaries that drew on a number of contemporary preoccupations related to food cultures: novelty, entertainment and leisure pursuits; convenience and time-saving; effective production and distribution; health and nutritional aspects; and environmental impacts and global food security.

I found that the widespread adoption of the term ‘3D printing’ to describe the digital additive manufacturing process serves to position this technology as a familiar domestic device, albeit one not usually employed to generate edible products. Digital printers, while they are common as devices in the workplace and home office for printing words on paper, are not generally associated with the production of edible materials or the location of the haute cuisine restaurant or home kitchen. As food processing machines, they currently largely inhabit the status of the futuristic machine of science fiction or fantasy (as in the ‘Star Trek’ food replicator shown below).

A tension was evident across news reporting between attempts to emphasise the futuristic and novel affordances of 3D food printing and those that sought to render them familiar and therefore more acceptable to potential consumers. Related to this tension was the contrasting of the banal and the mundane with the sci-fi possibilities of food printing in the news reports. Some reported applications of 3D printing portrayed these technologies as little more than handy new kitchen gadgets, gimmicky machines for manipulating and presenting foodstuffs, or a more appealing way of processing and presenting everyday nutritious or easy-to-eat foods. Other reports took a far more speculative and futuristic approach in attempting to positively portray the possibilities and promises of food printing.

For the most part, scientific innovation was portrayed as a positive force in news reports of 3D food printing. The unconventional association in the news articles of digital printing technologies with such endeavours as gourmet and home cooking and efforts towards improving human health, world hunger and environmental sustainability only served to support its possibilities. The vast majority of online news reports represented food printing as ameliorative, progressive, entertaining and creative: a fine example of the marvels of modern science and digital technological developments with both entertainment and more serious purposes. Narratives on printed food drew on the conventions of science fiction and futuristic discourses to emphasise the novelty, scientific nature and potential of the technology.

The views of current or potential consumers concerning what they thought of printed food received little voice in the news media. As most of the technologies described in the news reports were not yet in use, few images portrayed people actually eating printed food products. Yet there was extensive discussion of consumers as potential beneficiaries of these technologies across the five promissory themes. 3D printed food was portrayed as offering home cooks convenience, saving them time and providing them with the opportunity to make and serve more nutritious food. People in special circumstances such as astronauts, refugees, those in emergency situations and air travellers, as well as those with chewing and swallowing difficulties, were also singled out as potential beneficiaries. Consumers who enjoyed new foods and styles of eating were another group targeted in news stories.

I have mused before on this blog about the need for sociocultural and critical perspectives on 3D printing technologies (see here). I recently submitted an entry on 3D printing for the Wiley Blackwell Encyclopedia of Sociology. This entry needed to be very short, and in writing it I worked from a longer working paper that includes more detail and references. This working paper can be found here – the abstract is below.

Three-dimensional (3D) printing is a process of fabricating objects using computer-aided design software and hardware that responds to instructions from the software. In this working paper, I provide an overview of 3D printing technologies, including their current and proposed uses. It has been suggested that these technologies offer a way of contributing to the reduction of environmental pollution by reducing the need for transporting goods and minimising waste and energy use in production and may lead to third industrial revolution, including in developing countries. The technologies have also been heralded as promoting open knowledge sharing and creative coding and as potentially contributing to participatory design opportunities and the democratisation of invention, as well as education and cultural heritage. The paper addresses the social, cultural, political and ethical issues concerning 3D printing and outlines directions for future sociological research on these technologies. 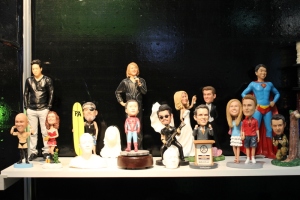 I recently completed a book chapter on what has been termed ‘3D selfies’: replicas of people that have been fabricated using computer assisted design files and 3D printing machines. Here is the abstract (the full chapter can be accessed as a preprint here):

A new form of representing selfhood and embodiment has emerged in the wake of the development of 3D printing technologies. This is the 3D printed self replica, a fabrication using digital 3D body scans of people that produces a material artefact of a person’s entire body or parts thereof. The technologies to generate these artefacts are rapidly moving into a range of leisure domains, including sporting events, shopping centres, airports, concerts and amusement parks as well as fan cultures and marketing programs. 3D printed self replicas can even be fabricated at home using a software package developed for the Xbox Kinect game box and a home 3D printer. As I argue in this chapter, there are deeper implications of these artefacts for the ways in which we understand not only the body, selfhood and social relations and the engagement of people in leisure cultures but also people’s entanglements with personal digital data. The 3D self replica as a case study offers an opportunity to think through some of these intersections. As personal digital data ‘made solid’, these artefacts offer new ways of thinking about the ways in which digital data can be employed to represent bodies/selves and become biographical objects, mementos and signifiers of important or intimate events in people’s lives. Their use provides insights into data practices, or how people interact with and make sense of digital data in an era in which such ‘lively’ data are ceaselessly collected about them.

As a digital sociologist, I have become fascinated by the social and cultural implications of 3D printing technologies. Few sociologists or any other critical academic commentators have begun to investigate how 3D printing is beginning to affect society. Yet as 3D printing technologies move into an expanding realm of contexts, there is much opportunity to analyse their effects. Not only are these technologies having an impact on industrial manufacturing and the distribution of goods, makers, artists and designers are taking them up in intriguing ways. 3D printing is being used in medicine and dentistry, public relations and marketing and in fan cultures. These technologies are being introduced into schools and incorporated into the curriculum. As the price of 3D printers falls, they will become an addition to more households. There are significant environmental and legal issues in relation to how they are used, including questions about intellectual property.

As part of my initial explorations into the sociology of 3D printing, last week I published two pieces on these technologies. One was an article for The Conversation, in which I discussed the phenomenon of the 3D self replica. This is a figurine that can be made of a person using the digital data derived from 3D scanning software. The technologies to generate these artefacts are rapidly moving into a range of leisure domains, including sporting events, shopping centres, airports, concerts and amusement parks as well as fan cultures and marketing programs. 3D printed self replicas can even be made at home using a software package developed for the Xbox Kinect game box and a home 3D printer. Some commentators have referred to these replicas as ‘3D selfies’ because they involve the production of a personal likeness. In the article I speculated about the ways in which people may start to use these figures as markers or mementos of their bodies and social relationships.

The second piece was an academic article that discusses the use of 3D printing of what I entitle ‘digital body objects’ for medical and health-related purposes. The article explores the use of non-organic materialisations of people’s body parts for medical purposes as well as the fabrication of self-tracked bodily data into objects. Here is the abstract: the full paper can be accessed here:

The advent of 3D printing technologies has generated new ways of representing and conceptualising health and illness, medical practice and the body. There are many social, cultural and political implications of 3D printing, but a critical sociology of 3D printing is only beginning to emerge. In this article I seek to contribute to this nascent literature by addressing some of the ways in which 3D printing technologies are being used to convert digital data collected on human bodies and fabricate them into tangible forms that can be touched and held. I focus in particular on the use of 3D printing to manufacture non-organic replicas of individuals’ bodies, body parts or bodily functions and activities. The article is also a reflection on a specific set of digital data practices and the meaning of such data to individuals. In analysing these new forms of human bodies, I draw on sociomaterialist perspectives as well as the recent work of scholars who have sought to reflect on selfhood, embodiment, place and space in digital society and the nature of people’s interactions with digital data. I argue that these objects incite intriguing ways of thinking about the ways in digital data on embodiment, health and illnesses are interpreted and used across a range of contexts. The article ends with some speculations about where these technologies may be headed and outlining future research directions.

These initial forays into a sociology of 3D printing represent merely a small component of possible avenues for theorising and research into the social impact of this technology. What I am particularly interested in at the moment is the implications for people’s data practices, or how the material objects that are generated from 3D printing technologies act as ‘solidified’ personal data. Future writings will investigate these issues in greater depth.