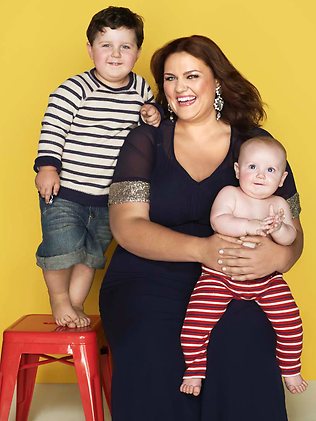 Chrissie Swan with her sons

This week an Australian television and radio personality, Chrissie Swan, appeared in a cover story of a well-known national women’s magazine talking about her family. Swan has two sons, one a baby and other aged three. The story included photos of Swan and her sons, which demonstrated to readers that her elder boy, Leo, was rather chubby. Following publication of the story, social media forums erupted with a debate about whether Swan should have ‘allowed’ Leo to become fat and proffering advice about what she should be doing about it, including comments highly critical of Swan.

This criticism received much attention in other parts of the internet and on mainstream Australian news media. Swan was forced to appear on television and radio programs to defend herself. She noted that she herself had struggled with her weight throughout her life and had recently become aware that Leo was ‘a bit heavy’ and was working to do something about it. Swan also commented on the unkind nature of the comments and that she had been reduced to tears in response.

It is not surprising that this debate received so much attention. It brings together two extremely potent and value-laden cultural concepts: that of the ‘good mother’ and that of the ‘fat child’. Dominant concepts of the ‘good mother’ contend that mothers should closely monitor and regulate their children’s bodies, paying careful attention to their health and wellbeing and acting upon any problems that may arise. They should consult expert advice as part of their efforts to promote their children’s health.

The figure of the ‘fat child’ has received a high level of public health and mass media attention since the late 1990s. A moral panic has developed around the issue of ‘childhood obesity’ and it has been argued that children are now more overweight than at any other time in human history. Fatness in general is surrounded with moral meanings concerning lack of self-control, greed and laziness. When small children are considered to be overweight, these moral judgements are transferred to their mothers. As in the case of Swan, such women become positioned as ‘bad mothers’ who have neglected their children’s health.

What is also evident from the criticism of Swan is that mothers, particularly those in public life but also ordinary women, are constantly placed in a position in which their parenting and the way in which they care for their children are open to judgement from others. This begins when pregnant women in public spaces may be castigated by strangers for smoking or consuming alcohol. Judgement of mothers follows into early infancy, when women who do not breastfeed, or those who breastfeed in public, may be reprimanded and called to account by others. Throughout their children’s early years, problems or health conditions experienced by their children are frequently positioned as the result of a mother’s failings to heed expert or lay advice about how best to care for her children.

I have found in my own research with mothers about their beliefs and experiences of promoting their infants’ and young children’s health that they are highly aware of conforming to the ‘good mother’ ideal in taking responsibility for their children’s health, development and wellbeing. They are also aware of the judgements that other people made of their actions, including other mothers. Most mothers in my study were concerned about the ‘obesity problem’ and attempted to ensure that their children ate a healthy diet and exercised. They even tried to act as role models for their children in relation to these behaviours by disciplining and regulating their own bodies. But the women were also confronted with the fact that they do not have full control over their children’s health, development and wellbeing. Despite their mothers’ best efforts, children sometimes become ill or have an allergy, developmental or behavioural problem, or may refuse to eat the ‘right’ kinds of foods.

Concepts of health risks have become privatised to the sphere of the home and to the figure of the ‘good mother’. Notions of fate as causing ill-health or disease have given way to the idea that these conditions are the result of the individual failing to take up medical or public health advice to engage in health-promoting behaviour. As a result, women blame themselves for their children’s health problems, or are blamed by others. And the role of the fathers of these children in caring for them and protecting their health are barely mentioned.