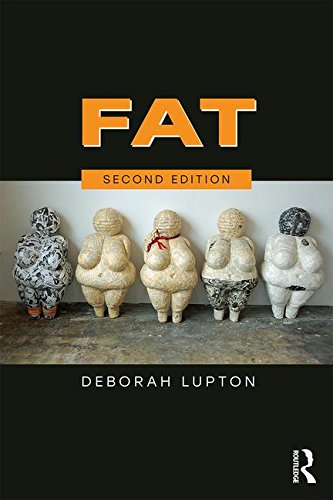 The second edition of my book Fat has now been published, with a great new cover. This version is twice as long as the first edition. Each chapter has been revised and updated and there is a lot more material in the new edition on how digital material represents fat bodies (for example, memes, GIFs, YouTube, hashtags, selfies and social media platforms such as Tumblr, Twitter and Instagram).

My author’s preface to the second edition is below. The link to the book on Google Books is here, which provides a preview of more content.

The first edition of Fat was completed in 2012, a time at which academic interest in understanding the discourses, practices and politics around fat bodies had been intensifying for some years. Several years later, this topic of study remains a fulcrum where various issues and controversies concerning identities and embodiment converge and intensify. To some extent, the panic about the so-called ‘obesity epidemic’ has died down, perhaps due to the news media losing interest and other health issues receiving policy attention. Meanwhile, the views of fat activists have made greater ingress into public debates about obesity; if remaining subject to controversy or denial. Some of the topics I covered in the first edition have become more complex, with new research paying greater attention to the intersectoral aspects of fat embodiment: how social class, ethnicity or race, sexual identity, age and geographical location shape experiences. Further discussion has sparked up around the question of who can speak about or advocate for fat people or engage in critical analyses of obesity politics – must they be fat-identifying people or can others participate in these debates?

Since I wrote the first edition, as part of a turn towards the visual in popular culture, the representation of human bodies of all shapes and sizes have received greater levels of coverage in new digital media forums. These media offer many more opportunities for self-representation and for body positive and fat activists to draw attention to their causes. However, the fit and thin body continues to dominate in these forums as the ideal body type, often around the ‘fitspiration’ label. Social media allow the vilification and stigmatizing of fat people to intensify and be more easily distributed to ever-larger audiences. New digital media and devices promote a culture of intensified self-monitoring and measuring of bodies, and comparing them against norms. Many more apps and wearable devices have come onto the market, aimed at encouraging and helping people to count calories and track their physical activity and body weight in the interests of conforming to these ideals. These media, therefore, have made bodies of all sizes ever-more visible and subject to private monitoring and public display. These issues and topics all receive attention in this second revised edition.