Digital technologies for health-related topics and practices such as websites, online discussion forums, social media, content-sharing platforms, mobile apps and wearable devices are now available as a means for young people to learn about and promote their health, physical fitness and wellbeing. Young people are often assumed to be ardent users of digital health technologies by virtue of having been born into the age of new digital media. Thus far, however, few social research studies have directed attention to the details of how and why young people use digital technologies for health-related purposes and how other, non-digital sources also contribute to the ways in which they learn about their bodies and health and engage in practices to support their health and wellbeing.

The Young Australians and Digital Health Project, a qualitative interview-based study of 30 young Australians (aged 16 to 25 years) was designed to address these issues. The participants were recruited to ensure equal numbers of female and male participants and a spread of ages, ethnic backgrounds and geographical locations across Australia. The interviews took place in April-May 2018. Participants were asked a series of questions relating to how and why they sourced health and medical information and support, and which of these they found most and least useful and helpful. They were asked if anyone had recommended that they use digital health technologies and whether they had any concerns about their personal health data privacy and security. The final question had a future-oriented perspective, asking participants to imagine and describe an ideal digital health technology for their everyday needs.

The interview questions and analysis of transcripts of participants’ responses were designed to draw attention to the affordances of the actors involved (human and nonhuman), relational connections between these actors, affective forces and agential capacities. The affordances of fleshly human bodies include their sensory perceptions, emotional responsiveness, embodied expertise, memory and the ability to learn and to move in certain ways. The affordances of nonhuman objects such as digital technologies relate to the design features of these technologies and what they potentially allow people to do with them. Relational connections include the ways in which humans interact with and respond to other humans, as well as with nonhumans, and how these relationships contribute to or generate bonds and affects.

As the table below shows, all participants said that they sought information from doctors and other healthcare providers, and most also turned to advice from friends and family members. Very few young people used books for health information, but pamphlets were still read by around a third of participants (usually picked up in doctors’ surgeries while waiting for a consultation). In terms of digital tools and resources, search engines were used by everyone, with health websites a close second. All the participants said that they were routinely online throughout the day and were accustomed to searching the internet as a habitual practice for various purposes. They generally searched between once or twice a week or once a month for health-related topics.

Youtube, online discussion groups and social media groups were fairly well-used, but by less than half of the participants. Participants noted that these sources were often found from an initial search using Google Search. Only five of the 30 participants said that they had signed up to My Health Record (Australia’s nationwide patient electronic medical record), with the remainder noting that they had not heard of it.

The convenience, accessibility and detail and diversity of information offered by digital media and devices were valued by the participants.

So I would initially just google my query and do a little bit of research on my own but then I would take my problems to a doctor and they would have more detail and more answers for me. I would usually just look up, kind of, symptoms and triggers for certain things. I would mainly just look up information, possibly finding a solution on my own. I like going online for the ease of use, ease of access, variety of information available, all that kind of stuff. (male, 24 years)

The young people also appreciated being able to source others’ personal experiences online by using online discussion forums, social media groups and viewing people’s stories on YouTube. They felt connected to the physically distant others they encountered online through their sharing of experiences and affective responses on these platforms.

Well, probably I just read forums to find information on the forums, the one thing I find useful is that they have allowed people to express their own feelings with different kinds of diseases. And I find that if it relates to me, then I guess it doesn’t make me feel so alone – knowing that what I’m going through, someone else is going through it with it. (male, 24 years)

Apps and wearable devices (mostly Fitbits) were used for mental health and wellbeing and booking medical appointments, as well as for self-tracking sleep, heart rate, steps and other physical activities, and menstrual cycles. Digital exercise games such as Wii Fit and physical activity platforms like Strava were the least used of all the technologies listed. Few participants who did use them did so regularly, with several participants noting that exercise games were too time-consuming to set up.

Doctors were highly valued as the pre-eminent source of health information authority because of their training and expertise. Young people noted that it could be difficult to distinguish between different opinions and details about health and illness expressed online, requiring them to assess which sources were most valid and reliable. By comparison, a doctor’s expertise was individualised to patients’ specific needs and they could offer knowledgeable interpretations based on their training. Young people could then defer to this expertise.

I guess online there’s a lot of different opinions on what something – like, if you think you’ve got a cold or something like that then you go online and I guess you’re not really qualified yourself to go, this is actually what symptoms I’m experiencing and this is what it actually is. Whereas I feel like if you go to a doctor they’re able to pinpoint it quite well. (female, 22 years)

The participants highly valued the capacity of digital technologies to generate detailed information about their bodies and health states and imagined new technologies that would be able to achieve even more detailed personalisation and customisation. However, they expressed little knowledge or concern about how their personal health data may be exploited by other actors or agencies, despite the fact that the interviews took place a matter of weeks after the Facebook/Cambridge Analytics personal data scandal. Several participants said that they had noticed that companies like Facebook and Google were monitoring their online searches and content for advertising purposes, but these practices were accepted as the norm for online engagement.

Obviously, Google, because they’re finding ways to link to merchandise, or that’s what I believe, personally.  If I look up fitness they’ll say, “Oh look at this fitness gear; why don’t you buy it?” I think it’s just society today – I can’t really stop it. (female, 18 years)

The participants’ accounts highlight the importance to this demographic group of the relational and affective dimensions of seeking health-related advice and information. While all the participants went online routinely and regularly to find advice and information, particularly because the internet affords convenience, ready access and a wealth of diverse opinions, it was evident that their connections and relationships with other people, both face-to-face and digitally mediated, were very important. Other key affordances offered by digital technologies included offering material that could be viewed anonymously and unobtrusively.

Feeling understood by and connected to other people was an agential capacity generated through various combinations of humans with each other and with technologies. The ideal digital health technologies that were imagined by the participants also evoked the affordances of convenience and accessibility. These imaginaries also suggested the importance to young people of technologies that could ‘know’ and ‘understand’ them better than those they had already tried.

In summary, these findings highlight that gaining a better knowledge of bodies, illness and healthcare and feeling more in control of health and wellbeing states were important to the young people. They valued face-to-face as well as online relationships and personal connections with other people for providing information and support, including family members and friends as well as medical professionals.

These were the vibrancies that animated the participants’ enactments of seeking and finding health information and support, that kept them googling, reading the content of websites, social media platforms and online forums, watching videos and using apps and wearable devices. While the young people’s consumption of this content may overtly appear to be passive, given that they tended to view rather than create online content, the young people were actively making sense of the material they were accessing and gathering, deciding how relevant or valid it was for their needs, how they would respond to it and whether they needed to seek further advice from doctors or others.

Today I attended a workshop to learn how to draw graphic narratives — in effect, comic strips. I was interested in learning this technique as research translation and engagement tool. I thought that it could be a fun way to visually represent findings from a research project. The method can also be used to plan research projects, as an alternative to tools such as mind-mapping or concept-mapping. The idea is that using a comic-strip format helps to simplify issues and present them in narrative formats.

We focused in the workshop on the best way to represent emotional states using simple drawing techniques. We started with drawing Donald Trump’s grumpy face using several different methods. Here’s the last Trump drawing I produced. We only had a minute to draw this one. 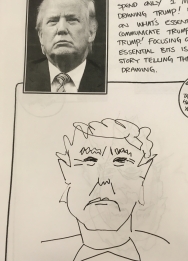 Then we moved on to practising drawing different facial expressions to convey emotion. Here I am working hard on this task.

We finished the workshop with a big task, which involved drawing a comic strip on a topic we had chosen. I decided to try and represent some research findings from a current project I have been analysing interview data from: on young people’s use of digital health. The project’s findings showed that young people constantly google health information and appreciate learning about the experiences of other young people, so that they feel less alone. YouTube is one source where they can find other young people talking about their health and illness experiences. But young people are also willing to seek medical advice if they feel this is needed. I tried to convey these key findings in my comic strip.