19 July: Ashleigh convened ‘Affect, Knowledge and Embodiment: A Critical Feminist Arts/Research Workshop’ at the Griffith Centre for Social and Cultural Research, Griffith University, Brisbane, with Dr Laura Rodriguez Castro (Griffith) and Sam Trayhurn (WSU).  Information about the workshop and copies of the zine can be found here. 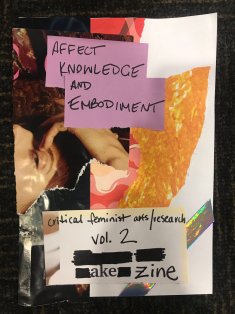 14 August: Deborah gave an invited lecture and a workshop, both on using social theory in a thesis, for the Arts & Social Sciences HDR student conference, UNSW Sydney.

19 August: Deborah gave an invited presentation to the UNSW Sydney Pioneers alumni association about her research on digital health. 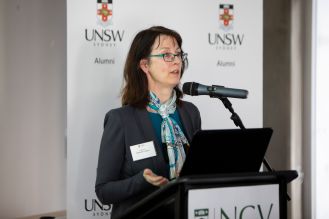 5 September: Clare gave a presentation on her chapter (co-authored with Miranda Bruce) about intimacies and the impersonal in ‘Black Mirror’, published in the edited volume Social Beings, Future Belongings (Routledge) at the book launch, ANU, Canberra. Her presentation and others at the launch can be viewed here.

9 September: Ashleigh ran a zine-making workshop at the Vitalities Lab on the theme of ‘algorithmic micropolitics’. A blog post about the workshop and the zine itself that was collaboratively made by participants can be found here. 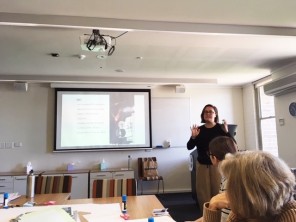 Call for submissions: So Fi Zine

Ashleigh has launched the call for submissions for So Fi Zine edition #6 – So Fi Zine is a sociological fiction zine for arts-based research, creative sociology, and art inspired by social science. The zine publishes short stories, poetry, photography, photo essays, cartoons, and other creative works. Edition #6 will be published in November 2019 and is inspired by Deborah Lupton’s digital, creative, more-than-human and future oriented research. Pieces are invited that creatively explore sociological futures: bodies, spaces, disciplines and things. Submission info and previous edition of the zine can be found here.

On Monday September 9, a group of researchers joined us for a workshop on the topic of algorithmic micropolitics. The workshop was held by the Vitalities Lab, Centre for Social Research in Health and Social Policy Research Centre, UNSW, Sydney. Bringing together zine-making and digital data, we collaboratively made a zine to critically consider how we experience algorithms in everyday life. This workshop drew on and was a primer for some of the arts-based and co-design work we are doing in the ARC-funded project ‘Living with personal Data: Australians’ Understandings and Practices’.

To guide us in thinking about algorithmic micropolitics, we drew on excerpts from Taina Bucher’s 2018 book If… Then: Algorithmic Power and Politics and Deborah Lupton’s forthcoming book Data Selves: More-Than-Human Perspectives.

Chapter 5 of Bucher’s book focuses on ‘the barely perceived transitions in power that occur when algorithms and people meet’ (2018 p. 93). To start…

My new book Data Selves: More-than-Human Perspectives is due for publication next month. Below is an edited excerpt from the Introduction chapter, in which I explain my theoretical approach.

The phenomenon of personal digital data poses a challenge at an ontological level. Personal data blur and challenge many of the binary oppositions and cultural boundaries that dominate in contemporary western societies. Personal data are both private and public. They could be considered to be owned by, and part of, the people who have generated them, but these details are also accessed and used by a multitude of other actors and agencies. At a deeper level, personal data challenge the ontological boundaries between the binary oppositions of Self/Other, nature/culture, human/nonhuman, and living/dead. Discussions of how digital data about and for people are incorporated into everyday lives must therefore grapple with the problem of how we conceptualise the idea of ‘the human’ and life’ in relation to the digital data that are generated by and for humans. Because digital data are associated with non-human entities such as digital devices and software, and because they are often viewed as non-material entities, they are often de-humanised and de-materialised in discourses. The oft-used term ‘big data’, for example, tends to portray large digital datasets as de-personalised and anonymous, even though these datasets are often comprised of very intimate and sensitive details about people and their lives. Alternatively, explanations of how people collect and make sense of their own data are often reduced to individualised models of cognition or behavioural psychology, removing the sociocultural, sensory and affective dimensions of how people generate and respond to these details about themselves …

Feminist new materialism also calls into question and problematises how we might define and materialise personal data. While the literatures on datafication and dataveillance tend to assume that personal data are digital artefacts that are primarily materialised in two-dimensional visual formats as the outcomes of humans’ encounters with digital technologies, an emergent body of scholarship in what has been termed ‘posthuman’ or ‘post-qualitative’ inquiry (Lather and St. Pierre 2013; MacLure 2013) contends that data about humans can be any kind of matter, both organic and inorganic. Human flesh, bones, tissue, blood, breath, sweat or tears, human sensory and affective responses and reactions, objects that people use as part of their mundane routines, or artworks and creative writing outputs, for example, are among the materialisations of and participants in human experience that can be viewed and treated analytically as ‘data’ (Koro-Ljungberg et al. 2017; Taylor et al. 2018).

Drawing on this perspective, I argue that examining the multitude of media (loosely defined) that are used to represent personal data, including arts-based and three-dimensional approaches, is one way of working towards a different way of thinking about their onto-ethico-epistemological aspects. Expanding the definition of what materials can be treated as personal data works to highlight the performative, embodied, multisensory, affective and agential dimensions of human-data assemblages. Not only does this perspective acknowledge the more-than-human worlds of personal data, it also highlights the more-than-digital dimensions of these assemblages.

In this book, I take up calls by Barad (in Dolphijn and Van der Tuin 2012) and Braidotti (2018) for a critical posthuman studies that incorporates an affirmative ethics. For Braidotti (2018), the mutable and distributed nature of human agency offers a politics that is able to challenge current fears and preoccupations. Cartographies of power relations and their associated entitlements, agencies and capacities can provide detailed ways of thinking through and with political practices and subjectivities. They help to think differently about figurations of human action, belief and practice, their implications, boundaries and limitations, and how new modes of being and acting can be configured and political change effected.

Central to my argument is that in the face of the continuing de-personalisation and de-humanisation of details about people’s bodies and lives that have been rendered into digital data, a new onto-ethico-epistemological position should be developed that reinvests human-data assemblages with different meanings and reconceptualises what we mean by ‘personal data’ – and indeed, how we think about and treat our ‘data selves’. In so doing, we can begin to think more seriously and deeply about what is at stake when human-data assemblages are de-personalised and de-humanised. If these new ways of thinking are taken up, they have significant that go to the core of selfhood, social relations and embodiment as they are enacted in more-than-human worlds.

In making my argument in the pages of this book, I seek to engage in what Barad (2007) refers to as ‘diffractive methodology’, which attempts to work with different bodies of research and theory to generate new insights. As she notes, it is the diffractive patterns of resonances and dissonances that make entanglements of matter and meaning visible. For Barad, diffractive thinking goes beyond critique to ethical engagements, involving reading insights through one another: ‘Diffractive readings bring inventive provocations; they are good to think with’ (Barad in Dolphijn and Van der Tuin 2012: 50). In the spirit of a diffractive approach, this book’s content is intentionally interdisciplinary and eclectic. While I work principally with feminist new materialism theory, relevant perspectives offered from scholarship in the anthropology of material culture, digital sociology, media studies, internet studies, cultural studies, information studies, archival studies, human-computer interaction studies, education, archaeology and cultural geography are also included.

Chapter 2 provides an overview of these perspectives and begins to explore how they might be taken up to theorise the more-than-human worlds of human-data assemblages. In Chapter 3, I address the ways in which personal data as a phenomenon is materialised in words, images and three-dimensional representations, including provocations and interventions from design- and arts-based approaches that offer alternative ways of thinking about personal data. In Chapters 4 and 5, I draw on empirical material from several research projects I have conducted since 2015 to provide insights into how people conceptualise and live their personal data (details of these projects are provided in the Appendix.) Chapter 4 discusses how people enact and make sense of their personal data and identifies the relational connections, affective forces and agential capacities generated by doing data. Chapter 5 reviews the ways in which the tension between the sharing ethos of participatory digital media and the dystopian imaginaries that circulate concerning the ‘internet knowing too much’ about people are dealt with in everyday data concepts and practices. In the Final Thoughts section, I present my vision for how a new ethics of caring about and living with our data selves might be developed.